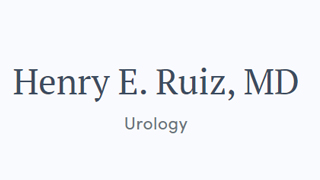 Dr. Henry Ruiz received his medical degree from Mount Sinai School of Medicine and completed fellowship training in Reconstructive Urology and Urodynamics from Duke University Medical Center. He received his second board certification and was named a Diplomat of Female Pelvic Medicine and Reconstructive Surgery in 2013. He has been a Diplomat of the American Board of Urology since 1997 and renewed his board certification in 2007.'