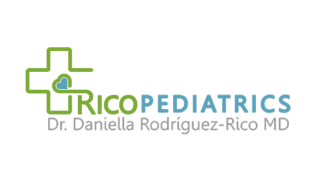 Dr. Daniella Rodriguez-Rico is a board certified pediatrician who opened her doors at Rico Pediatrics on June 3, 2019. After completing medical school at The Ignacio A. Santos School of Medicne from Instituto Tecnologico y de Estudios Superiores de Monterrey (ITESM) in Monterrey, Mexico,- in 2003. Dr. Rico attended Penn State Children’s Hospital in Hershey Pennsylvania for her pediatric residency and graduated in 2009. After finishing medical school, Dr. Rico completed clerkships in Pediatric Urology at Harvard Medical School in Boston, Massachusetts and Cardiology Transplant at The Methodist Hospital Research Institute in Houston, Texas. During her residency, she completed a clerkshiop in Reproductive Endocrinology and Infertility at the University of Miami School of Medicine in Miami, Florida. Dr. Rodriguez-Rico who is both fluent in English and Spanish. She is currently certified by the American Board of Pediatrics and is on Texas Medical Board. Dr. Rodriguez-Rico is certified in CPR/AED and Neonatal Resuscitation. Dr. Rodriguez-Rico has hospital privileges’ and rounds on newborns at Doctors Hospital at Renaissance in Edinburg, TX and at Rio Grande Regional Hospital in Mcallen, TX. Daniella Rodriguez-Rico MD has been awarded “Favorite Pediatrician” from the Readers’ Choice Award from The Monitor in 2016. Dr. Daniella Rodriguez-Rico is a board certified pediatrician practicing since 2009. Dr. Rico enjoys spending time with her family, doing exercise and reading